At Go Inspired, we have many programs in Florence, Italy during the summer. But that doesn’t mean there isn’t plenty to do in the winter as well! With the holiday season approaching, Florence has tons of events to make you get into the spirit. From German Christmas markets to a beautiful Christmas tree, Florence has something for everyone.

Warm up with mulled wine, strudel and hotdogs and admire handmade Christmas gifts from all over Europe. Until December 15, 10am-8pm, piazza Santa Croce, www.mercatini-natale.com.

The Magic of Advent

Welcome in Christmas Day by eating sausages and drinking local wine round a huge bonfire in the centre of Londa. Evening of December 24, www.comune.londa.fi.it.

Create a handmade Christmas decoration for free in the courtyard of Palazzo Strozzi, accompanied by live music. December 12, 7.30pm, www.palazzostrozzi.org

All ages will enjoy this array of winter sports, as well as food, drink, exhibition stands and entertainment for children. Until March 2, 2014, Obihall, Lungarno Aldo Moro, www.firenzewinterpark.it.

Skating rink at the Parterre

Christmas with the elves

Meet Santa and his elves, taste cakes by Mrs. Claus, listen to music, go on donkey rides and check out the market stalls- all in the historic streets round Pisa’s Logge dei Banchi. Until December 24, www.comune.pisa.it.

Meet Santa and his elves, and take part in a series of creative activities such as cake making, drawing and horse riding. Until January 6, 2014, Castello delle Terme Tamerici, Montecatini Terme, www.lacasadibabbonatale.it.

Concert by the Fiesole Music School

Get out your Rudolf nose or Santa hat for this crazy Christmas fancy dress concert! December 13, 9.30pm, Viper Theater, via Pistoiese/via Lombardia, www.viperclub.eu.

An evening of festive readings with music by the concert choir of St Mark’s Anglican church. December 18, 6pm, The British Institute of Florence, Lungarno Guicciardini 15, www.britishinstitute.it.

Christmas Concert by the Maggio Musicale

Concert at the Natural History Museum

Nine Lessons and Carols at St. Mark’s Church of England

Christmas in the World: A collection of over a thousand nativity scenes from all over the world, displayed in the Basilica di Santa Maria delle Grazie in San Giovanni Valdarno (AR). Until January 6, 2014, www.natalenelmondo.it.

Other towns known for their nativity scenes displayed in their historic centres are Palazzuolo sul Senio, Cerreto Guidi, San Godenzo, Calenzano, Castelfiorentino and Cigoli (most of them remain at least until January 6).

We hope you enjoy the holiday season in Florence, Italy. Thanks to the  Florentine, Christmas in Florence 2013 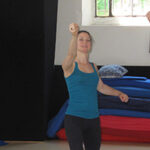